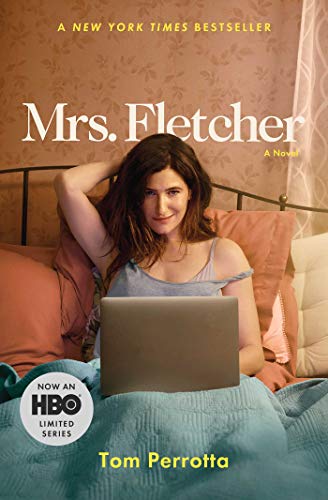 Divorced Eve Fletcher is getting ready to send her only son, Brendan, to college. In this case the college is the fictitious Berkshire State University in Massachusetts (aka BSU - the shortened version of  the non-fictitious Bridgewater State University in Massachusetts, where I work). This novel alternates between a third-person narration of Eve's life and a first-person narration of Brendan's.

Brendan meets Amber while trying to study at the University library. She comes to the library along with a group of students who are protesting the Michael Brown shooting (Ferguson, Missouri). For Amber Brendan is a "bouquet of red flags" but the two do share the fact that they each have an autistic sibling in common. This, however, is not enough to sustain a relationship. And despite the fact that he occasionally goes to the library to study, Brendan doesn't do well in college, and drops out by Thanksgiving.

Eve, meanwhile has been attending classes at the local community college. She enjoys her class in gender studies and interacting with her classmates, but in the spring when Brendan decides to enroll in classes there she gives this up so as to "spare him the embarrassment of attending the same college as his mother, of possibly bumping into her at the library..."

Something else Eve explores when she becomes an empty-nester is her own sexuality. One way she does is through a three way involving one of her much younger classmates (Julian) and one of her employees (Amanda). Not surprisingly Amanda leaves her job at the Senior Center shortly thereafter in order to take a job at the Public Library as Director of Children's Events "in charge of story time, arts and crafts, author visits, holiday celebrations...Kind of like here (the senior center) just with kids instead of old people." It is at the library that Amanda finds her soul mate "an excommunicated Mormon research librarian named Betsy".

This is good satire. Looking forward to watching the HBO series.
Posted by YearofBooks at 10:42 AM