Falter: Has the Human Game Begun to Play Itself Out - by Bill McKibben 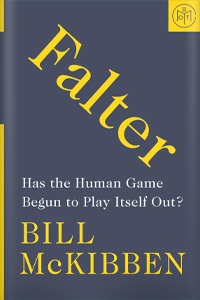 Some might call this book alarmist, but since McKibben called it on global warming back in 1989 when he wrote The End of Nature I'm not going to ignore his warnings here. Exploring Artificial Intelligence (AI), biotech, the billionaire class, and genetic engineering McKibben looks at how these things are part of a symbiotic relationship leading to a dystopic end of life as we know it. He pulls no punches as calls the villians out by name.

Writer Ayn Rand, author of The Fountainhead, and Atlas Shrugged and a darling of conservatives, is given a fair bit of print in this work. McKibben points out that


The cult of Ayn Rand extends far beyond the richest and most powerful. When the Modern Library asked readers in 1998 to catalogue the greatest books of the twentieth century...Atlas Shrugged and The Fountainhead were ranked one and two. Plenty of readers might have agreed with Barack Obama, who described Rand's work as "one of those things that a lot of us, when we were 17 or 18 and feeling misunderstood, we'd pick up". But plenty of others have never put her down. One biographer described her as "the ultimate gateway drug to life on the right."

We may be able to take some solace that three of Rand's titles also show up on Goodreads list of Books You're Ashamed to Admit You Read.

Posted by YearofBooks at 8:42 AM