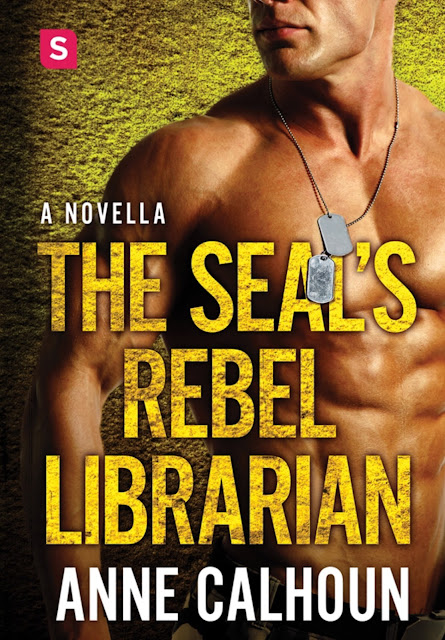 August is Read-A-Romance Month, and while I don't read many romances, I do find them to be good escape. I also like to be thematic, so each August I do a bit of summer reading in the genre. Earlier this month I read some LGBTQ YA lit, What If It's Us by Becky Albertalli and Adam Silvera, which was a sweet story but, sadly, had no librarian. Therefore, I had no choice but find another romance novel to read, one worthy of this blog. And a funny thing happened when I started to Google "romance novels featuring librarians". The autofill completed my search string with "navy seals" before I could type the word "librarian". I laughed wondering why the algorithm would make such a suggestion for me while also thinking that there really is a reading fetish for everyone (and far be it for me to question someone else's choices). But then a really strange thing happened when I finished my search the way I intended. The list of recommendations included a novel featuring both a librarian and a navy SEAL. It seemed the bibliosphere was trying to tell me something, so I downloaded the book and started reading.
This is a quick read (a novella) which wastes no time getting to the sex. Librarian Erin recognizes that her affair with student/veteran Jack Powell is not sanctioned by the university. "She was in a leadership role at the college, bound by the same rules governing relationships as a professor or administrator." Nevertheless, after initially rejecting his offer of a drink, she throws caution to the wind and invites him to her place (ostensibly for coffee), and then to one of the group study rooms in the library where Jack actually "shushes" Erin and is sure to tell her that they're "gonna have to be quiet". As if she didn't know.
The sex in this one comes early and often, as such just about every possible word choice is used to describe body parts, and articles of clothing. This was unfortunate for me as I really don't find the words "slacks" or "panties" sexy at all, and each was used quite a few times. Final tally: Panties-9; Slacks-6.
A little better editing would have been in order, especially since the audience was sure to include some anal-retentive librarians. It was unfortunate for me that I noticed the following inconsistency: prior to Jack and Erin's first sexual encounter, when they met by happenstance at the motorcycle dealer where Erin is about to put down a deposit, she is described as wearing a green turtleneck. However, somehow when they got back to her place and undress he's fumbling with the buttons on her blouse. So which is she wearing a turtleneck or a button-down blouse? So distracting.
The most off-putting thing for me though was the use of the word "pussies" to describe those who ride certain models of motorcycles that are not perceived to be as macho as other models. I frankly almost stopped reading when I got to that part. Anyone who is so uncomfortable in his own masculinity that he would resort to this kind of name calling will never find himself between the stacks with this librarian.
Posted by YearofBooks at 7:50 AM