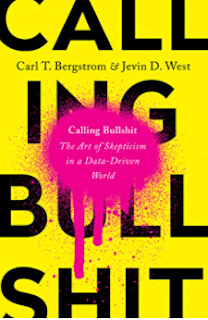 At a recent meeting on information literacy on our campus a colleague from the Biology department called my attention to this work, which is based on a course the authors teach at the University of Washington. More than just how to spot fake news, the authors remind us that bullshit is everywhere. It is in local and national news, in our social media feeds, and yes, even in PR from University Administration.
We cannot blame the messenger for any of this. Early in the work the authors describe the lament of fifteenth century priest and scribe Filippo de Strata who "railed against the damage wrought by the invention of the printing press". He worried that the low cost of printing materials would place written materials in the hands of the masses thereby lowering their value and authority.
Five hundred years later in 1969 sociologist Neil Postman's comments on the pablum of mass media expresses concern that "infotainment" will distract the masses from real issues. Neither de Strata nor Postman could have imagined the level of bullshit brought on by the internet.

Publicly, Filippo de Strata fretted that the 'brothel of the printing press' would lead readers to cheap salacious entertainment...Privately, he may have been more concerned about his own job security.

I sometimes wonder about scholars, and some librarians who wish to guard certain information (under the guise of academic freedom). Is it the scholarship they are really attracted to, or simply the idea that they want others to believe that they are the ultimate authority?
A few years ago I read this article that discussed the issue of "abstract spin", the idea that authors of academic papers made their abstracts (sometimes the only part of a paper another person reads) focus on the juicy parts of the study. In this way they are more likely to get press coverage. Of course no one reporting on the story actually read the article, and may not have even read the abstract directly for that matter. The authors of Calling Bullshit likewise discussed the question of what gets covered in the popular press and what doesn't. Most notably that "negative results simply aren't exciting". Furthermore

The research studies that are reported in the popular press are not a random sample of those conducted or even of those published. The most surprising studies are the ones that mate the most exciting articles... When science writers cast scientific studies in popular language, they sometimes omit important caveats, offer stronger advice than is justified, present correlations as causal relationships, or extrapolate from findings in lab animals to suggest immediate application in humans

I attend a fair number of presentations on fake news and misinformation, and have occasionally given them myself. One thing that can be counted on at any of these kinds of workshops is a question about how to convince someone that they are spreading false information. I don't really have a good answer for them, and typically I've noticed other presenters don't either. Bergstrom and West provide some good advice including understanding that a person's identity may be tied to their world view so "decoupling" issues of identity from the story you want to debunk is important. To wit:
Keep it simple - "falsehoods can be crafted to be simple" (consider how often we see meme's reduced to two pictures demonstrating someone  - or something - as bad and the other as good). When offering a counterargument keep you story simple as well.
Take it offline - don't publicly humiliate another person - you will not convince them and you will surely piss them off.
Find common ground - recognize that the other person has concerns (just as you do).
Do not repeat the myth before debunking, this increases the likelihood that the myth will be perpetuated. A good piece of advice I got regarding debunking things on social media is not to simply put a comment with a link to the source. For one thing most people won't see it, and for another it is a bit embarrassing for the original poster who may have shared in good faith. I also learned not to share the post with my own commentary as that will likely perpetuate the myth as well. Instead I download the post, change it and repost so that is is clear that I am breaking the chain of sharing. Here is an example 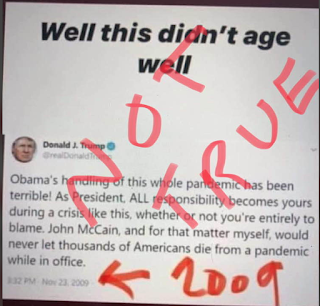 And finally the authors provide these tips for detecting bullshit:
1. Questioning the Source of the Information
2. Beware of Unfair Comparisons

Find out how comparisons are being made between x and y. Comparisons may be between two different kinds of things (apples to oranges)  or there may be some arbitrary condition thrown in that skew the results

Statistics have been cherry picked so that readers will generalize, or an incomplete picture is drawn with only partial data reported. Go to the original source to get the real story. I actually practiced what I preached here with the story about abstract spin (above). Once I read the article in the in Inside Higer Ed I found the original study and read it, too.

And remember "When you are using social media, remember the mantra 'think more, share less'".
Posted by YearofBooks at 8:08 AM