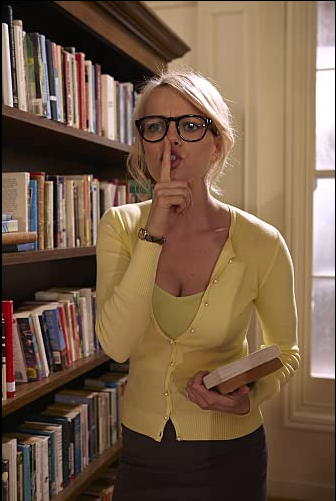 I do love me some metafiction.

Mircea Monroe isn't a librarian, but she plays an actress (Morning Randolph) who plays one on TV.

This smart, witty, irreverent comedy stars Matt LeBlanc playing a fictional version of himself who stars in a comedy about a hockey coach at a boys' boarding school. The show (Pucks!) was imported from the UK where it was a hit, but is a bomb in the US due partially to LeBlanc's involvement.

This series has some clever twists (along with a few clichés which I think we can overlook).

There is some interesting character development in this. Each of the characters (even the minor ones) has some depth. Monroe's character who on the surface appears to be just another plastic Hollywood type is also warm, funny, and likable. We don't see a lot of her as the librarian, other than getting made up in her stereotypical "sexy librarian" costume.

This is a fun series. Highly recommended.

Posted by YearofBooks at 9:53 AM