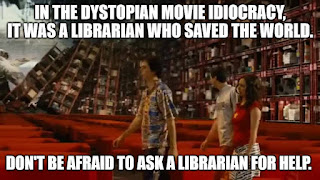 I learned about this film through the Librarian Memes Facebook Group. I also learned that it was available to watch for free on YouTube - albeit with ads, which I very much try to avoid. I bit the bullet though and my husband and I watched (with the occasional short interruptions). This film stars Luke Wilson as Joe Bauers (the librarian) and Maya Rudolph as Rita (a sex worker). Joe and Rita agree to be part of a top secret military experiment on suspended animation. Scheduled to be awakened after one year, instead they wake up 500 years later, to a world where these two rather average people are the smartest in the country.

A few comments about this work: