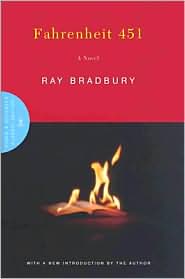 No celebration of Banned Books Week would be complete without some mention of Ray Bradbury's dystopian novel about a world in which all books are burned. This was Bridgewater, Massachusetts' One Book One Community selection for fall Fall 2008. We planned all of our events to coincide with Banned Books Week, including a reading, and discussion of information loss from author Junot Diaz; as well as a Banned Books Bonfire. We, of course, did not burn any books, but rather read banned books by the light of the flames.

There are no librarians in this book, and all the libraries in it are private, and illegal. Those who love books enough to hoard them in their homes are bound and removed when discovered, and then the firemen are brought in to destroy all their reading material. Bradbury says this work is often misinterpreted, and is not really about censorship, but rather about "how television destroys interest in reading literature". Read more here.

According to the author's introduction in this "Special Edition" created for the "Long Beach Reads One Book" program, the book was written in a library on a typewriter Bradbury rented for .10 a half hour in the early 1950s. It started out as a short story called "The Fireman". The title of the novel comes from the temperature at which paper burns. Bradbury first called the Physics department at UCLA to find out this bit of trivia, when they could not provide the answer he contacted the USC chemistry department, still no luck, finally he called the LA fire department who provided the information. Of course, had he asked a reference librarian in the first place one call would have been all he needed!

Ironic, of course, is that this book is among one of the most censored. Reasons for challenging this work include references to drunkeness, smoking cigarettes, "dirty talk" and the use of "damn" and "hell". In 1992 some students at Venado Middle School in California received copies of this book with some of these "offensive" words blacked out.
Posted by YearofBooks at 6:23 AM