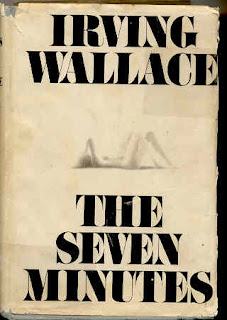 For the final day of Banned Books Week I chose the book that inspired me to become a librarian. I first read this sexy, subversive novel about 25 years ago. I liked it as much this time as I did then. It is a novel about a novel called The Seven Minutes - a "meta" novel - the story of "the most widely and completely banned book of all time" which tells one woman's thoughts during seven minutes of sexual intercourse. Wallace's book is the story of the obsenity trial that takes place soon after the book is published by a mainstream U.S. publisher - some 30 years after its initial publication by an underground press in Paris.What starts out as a "nuisance" case soon attracts international attention, and a major trial, when a college student from a "respectable family" implicates the book as what drove him to rape a young woman. Attorney Michael Barrett is determined to save the book from the censors.

There are two librarians in this book. One is a young man, Virgil Crawford, who runs the Special Collections Department at the fictitious Parktown College in Massachusetts. Described as "lively, boyish...slight, trim bouncy, enthusiastic, and eager to please" he does bust some librarian stereotypes, but not like Barrett's "favorite librarian" Rachel Hoyt. A public librarian for in the town of Oakwood, California, not only is she pretty and "as colorful as a psychedelic poster" she is also funny and thoughtful. When asked if she has read The Seven Minutes she replies "Three times...The first time a half-dozen years ago....Then when I learned...that Sanford House was publishing the book here....Then when Ben Fremont was arrested, I knew I had to make a decision as a responsible librarian. So I read it a third time with a careful, objective librarian's eye." Hoyt goes on to explain how political the job of a librarian is and makes it all seem so exciting. Who wouldn't want to be a librarian after reading this? I was disappointed when I watched the movie version to see the Rachel Hoyt character with such a small role, doing the one thing I didn't like about her character - discussing an individual library patron without a court order.

I stopped counting all the times libraries were used in this story. Business meetings took place in personal libraries, lawyers jetted around to do hands-on research, back at a time before information could be found online, sent by e-mail, or even faxed. One especially meaningful passage I marked described Barrett's reaction at visiting an autograph dealer "an experience new and thrilling. He had known that manuscripts, documents, letters written or signed by renowned men and women...had been collected and preserved in the remote recesses of awesome libraries and museums..." (emphasis mine). I must point out that this book was first published in 1969, back when "awesome" actually meant something. People reserved its use to describe things that were actually "awe" inspiring.

The book clearly illustrates the politics of book banning, and the paternalistic way in which the would-be censors discuss it - they (the censors) can handle the reading the book, but others may not. Those "others" must be protected. In this work we also see the phenomenon Herminone speaks of in Harry Potter and the Order of the Phoenix, when the arrest of an independent bookseller for selling the book makes it a most sought-after commodity. See my Harry Potter post.

It was very hard to research the banning of this book. Every time I tried I would simply get a plot summary. It turns out that this work attracted only minor attention from the censors. I found this passage in Irving Wallace: A Writer's Profile by John Leverence:

"The novel had its own censorship problems. Nine newspapers banned advertising because of the jacket, which featured a diffused, gauzy drawing of a nude woman, but other than that, and a few minor flaps, the book escaped the censors." p. 148.

This book was just as good the second time around. I hope it continues to inspire new would-be librarians.
Posted by YearofBooks at 5:16 AM