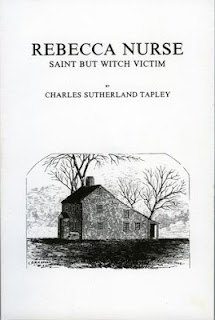 I have always been fascinated by the Salem Witch Trials. When we moved to Massachusetts there were two things on my "must do" list: visit Plymouth Rock, and see the Salem Witch Trials Memorial. Several years ago my cousin Cheri, who studies genealogy, informed me that one of the most famous victims of the trials, Rebecca Nurse, was, in fact, our great great great great great great great great great great (that's 10 greats) grandmother, so the next time I was in Salem I made sure to place a flower on her memorial stone (she was not allowed a church burial) and picked up a book about her at the Salem Witch Museum. Originally published in 1930, Tapley's book recounts Nurse's life, and trial, as well as providing some insight into the morés of the time. The final page of the book tallies Nurse's descendants at a total of 15,203. I imagine that now that we are almost a century past the publication of the book, it would be difficult to find anyone who isn't one of her descendents!


An important thing to note about the story is that since a belief in witchcraft was pervasive at the time, any unexplained phenomenon could be attributed to black magic. Some examples of the things blamed on witchcraft included illness and mysterious death, as well as this "thing worthy of observation" where we find the only place that a library is mentioned in the book (this was long before Ben Franklin, so it is a private library).


Winthrop the younger had in his library a volume in which the Greek Testament, the Psalms, and the Common Prayer were bound together, and that he "found the Common Prayer eaten with mice, every leaf of it, and not any of the two other touched, nor any other of his books, though they were about a thousand."

Sounds like witchcraft to me. Of course, it also sounds like hearsay, which comprised much of the evidence at the Salem witch trials.
Posted by YearofBooks at 5:49 AM