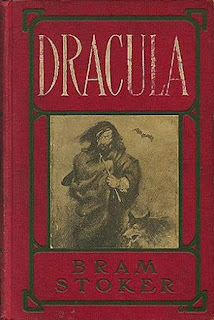 Although I have read and blogged about Vampire books before, seen countless vampire movies, and even traveled to Transylvania to see Vlad Tepes' (a.k.a. Dracula) boyhood home, I had actually never read Stoker's classic. It is scary; and Count Dracula is really mean, but at least he knows the value of a good book. He has his own library in his home, which he apparently makes good use of. Jonathan Harker finds the Count on at least one occasion in his library "lying on the sofa, reading, of all things in the world, an English Bradshaw's Guide".  Harker also makes use of the Count's library, in which he finds to his "great delight, a vast number of English books, whole shelves of them, and bound volumes of magazines and newspapers...The books were of the most varied kind, history geography, politics, political economy, botany, geology, law...." The Count, upon finding his guest in the library tells him that the books "have been good friends...and given many, many hours of pleasure..." The Count further explains that he used the books to learn about England in anticipation of his trip there, much the same way that Harker had visited the library at the British Museum in order to learn more about Transylvania before leaving London, "and made search among the books and maps...regarding Transylvania". He realized, of course, that the library was the place to gain "some foreknowledge of the country."

One more thing I must point out, that has to do with my Spanish-teacher self, rather than my librarian self, is this passage which refers to the arrival of Mina and Jonathan Harker, and others, in Galatz, Romania in search of the Count. One of the party, Mr. Morris, escorts Mina to the hotel. Morris is chosen for this task because he "could best be spared, (emphasis mine) since he [did] not speak any foreign language.
Posted by YearofBooks at 10:51 AM