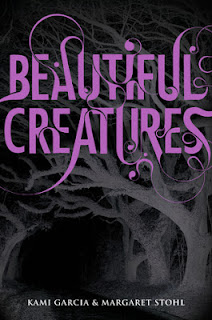 Back in February I blogged about the movie Beautiful Creatures. My post ended with "A fabulous library movie. I guess I will have to read the book now." I followed through shortly after I wrote the original post, but have been saving my post about the book for Banned Books Week. Although I have not read any official news reports of this work being challenged, based on its "witchcraft" and "anti-Christian" themes, I am sure it has been. As a bonus, banned books are a part of the story. Specifically, Harry Potter books are challenged at the Gaitlin County Library for promoting, you guessed it, witchcraft! A little meta-banning. Plus, there are two libraries that play roles in this work: the fantastic "Caster Library" and the Gatlin (South Carolina)  Public Library. Both are headed by a wonderful librarian character called - what else - Marian! Marian is able to run both libraries, because the Caster library is open only on holidays that the Gatlin Public Library is closed. As Lena points out this "hardly seems fair...the Mortals get so much more time, and they don't even read around here."

The novel's hero, Ethan, loves to read, and dreams of leaving Gatlin. We see this brought together when he tells us "Books were the one thing that got me out of Gatlin, even if it was only for a little while. I had a map on my wall, and every time I read about a place I wanted to go, I marked it on the map." He also tells his new girlfriend, the lovely Caster Lena, that he keeps books (actual novels!) under his bed, and reads them because he "wants to." What a devil!

The town library, "still had a card catalog" which seemed somehow fitting in what is described as beautiful, historic building, one of the two oldest in town - "a two-story venerable Victorian, old and weathered with peeling paint and decades worth of vines sleeping along the doors and windows [that] smelled like aging wood and creosote, plastic book covers, and old paper." It was a sacred place where Ethan's late mother, a serious Civil War historian, unlike the bigoted DAR members, "spent most of her time holed up...looking at microfiche". She told her son that the library was her "church", and that "any book was a 'Good Book', wherever they keep the 'Good Book' safe is also a House of the Lord." The Library was one place where Ethan could still feel his mother's presence. Ethan also knew that "Marian the librarian" was "the smartest Mortal in Gatlin"...and "she looked more like a model than a librarian...pretty and exotic-looking, a mix of so many bloodlines it was like looking at the history of the South itself, people from the West Indies, the Sugar Island, England, Scotland, even America, all intermingling until it would take a whole forest of family trees to chart the course." Ironically, he does describe his best friend's mother, Mrs. Lincoln (the book banner) as dressing "like some kind of punishing librarian out of a movie, which cheap drugstore glasses and angry-looking hair that couldn't decide if it was brown or gray."

Ethan points on several occasions that the library doesn't get much use and goes so far as to use the metaphor of "ghost town" to describe what it is like going in there. Even so, "studying at the library" was still offered up as a convenient lie to adults who wanted to know where he and his friends were going. And in Gatlin which Ethan declares "[not] a big library town" the library was also the place for Alcoholics Anonymous to meet "when the Baptists kicked them out".

The Caster Library or Lunae Libri is described as a crypt below the DAR building and is "thousands of times bigger" than any other library. On Ethan and Lena's maiden voyage into the tomb Marian warns them to trace their steps backward if they get lost "that's why the stacks radiate out from ...one chamber". The Library is so big some parts are still "uncharted".

Marian has some important observations about libraries:
"I'm just the librarian. I can only give you the books. I can't give you the answers."
"'Without libraries what have we? We have no past and no future'. Just ask Ray Bradbury"

Posted by YearofBooks at 7:50 AM

Email ThisBlogThis!Share to TwitterShare to FacebookShare to Pinterest
Labels: banned books, I was at the library, magic