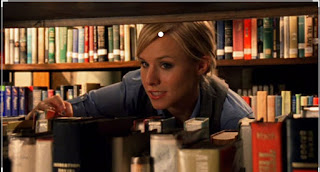 I missed the Veronica Mars television series when it first aired from 2004-2007. I doubt I even knew it existed. Back then, before there was streaming television,  people had to subscribe to a cable service if they wanted to watch TV, and my husband and I refused to pay for it. The only thing we watched on the boob tube were videos available at our local Blockbuster video store. We now subscribe to Netflix and Hulu which is how I was able to binge watch this smart, sassy show about a young woman who works for her father - a Private Detective. The first two seasons we see Veronica as a high school student. In season three she is a freshman at the fictional Hearst College where she gets a job at the college library. She is disappointed at this appointment, as she feels it is inferior to working for the school newspaper, and her letdown is evident in the crappy way she answers questions. She often appears annoyed, and waves people off to the stacks rather than attempting to do a proper reference interview. Worst of all, she closes the reference desk when her boyfriend shows up so she can go bone him on the ninth floor.

The recently-made fourth season features a grown up Veronica still working with her father at his Detective agency. It also features a reference librarian from the Hearst College library. The librarian has a bit part, and is unimpressed when Veronica points out that she, herself, used to work in the library. Maybe the librarian knew her then, and was aware that she wasn't the best student worker they'd ever had.

Anyway, despite the obvious drawbacks I enjoyed this series. Veronica seriously kicks butt.
Posted by YearofBooks at 8:38 AM

Email ThisBlogThis!Share to TwitterShare to FacebookShare to Pinterest
Labels: between the stacks, California, librarians on film, television, women