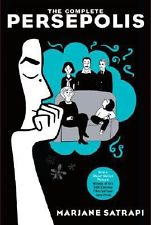 This graphic memoir that tells the author's story of growing up during Iran's Islamic Revolution got a lot of coverage in March and April of this year when it was banned in the Chicago Public Schools (CPS) for its graphic images of torture. While denying it banned the books CPS did say it ordered the book removed from seventh grade curriculum and classrooms. Hmmm...let's take a look at the American Library Association definition of  banning


A challenge is an attempt to remove or restrict materials, based upon the objections of a person or group.  A banning is the removal of those materials.  Challenges do not simply involve a person expressing a point of view; rather, they are an attempt to remove material from the curriculum (emphasis mine) or library, thereby restricting the access of others.  Due to the commitment of librarians, teachers, parents, students and other concerned citizens, most challenges are unsuccessful and most materials are retained in the school curriculum or library collection.

Like Bradbury's Fahrenheit 451 there is true irony in the challenge of this work in that part of it treats the issues of loss of information as well as the censorship of ideas. As a young schoolgirl Marjane is confused when she is told to tear all the pictures of the Shah from her schoolbooks; and finds her dreams of visiting the United States and going to University dashed when the US Embassy is occupied and hostages are taken. All the Universities were closed for two years while books at "all levels" were revised so as not to lead young people "astray from the true path of Islam".

The book also specifically tells of Marjane getting information from a library on at least two occasions. In one her father goes to the library and brings back three books that she reads in a matter of ten days: The Secrets of the CIA; Freemasonry in Iran; and The Memoirs of Mossagegh. In the other, she and her husband spend the summer in museums and libraries researching mythological heroes in order to design a theme park in Tehran, a plan which never is implemented.

Find out more about this controversy

Persepolis Stays in Chicago Public Schools but out of Classrooms

Watch March 18, 2013 - Controversy Over "Persepolis" on PBS. See more from Chicago Tonight.
Posted by YearofBooks at 4:59 AM