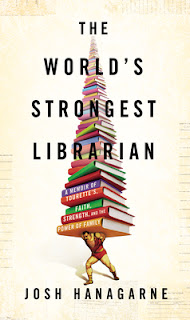 Well, I couldn't resist this one! Librarian Hanagarne begins each chapter of his life story with an anecdote about his work in the Salt Lake City Public Library, but most of what this book is really about is found in the subtitle: "A Memoir of Tourette's, Faith, Strength, and the Power of Family". As he tries to find the best way to live with Tourette Syndrome, he is also on a journey of strength training, parenting, and religious questioning.

Hanagarne writes about visiting the library as a baby and how he developed a true love for books and reading from a very early age, and all the librarians knew him by name. I was reminded about taking my own daughter to "book babies" story time at my own public library so that by the time she could walk the librarian remarked that she "strutted around like she owned the place". Now at age 16 she still loves the library, and in fact has a job at her high school library.

I loved reading that as a child Harnagarne's mother let him pick out whatever he wanted from the library. "He can read what he wants" she tells his father who worries that his son will "drive his teachers crazy" when he starts school. His mother's proclamation only goes so far though. She is unhappy about her fifth grader's choice of Stephen King's Misery and puts her foot down, telling him the book is not appropriate for him. Hanagarne, however, finds ways around his mother's prohibition. (See the Wikipedia entry on The Streisand Effect for more information about how forbidding something will only make it more desirable.) I also loved that as a fifth-grader Hanagarne read Are You There God, It's Me, Margaret . While reading Judy Blume's classic work was de riguer for all the girls in my fifth grade class, if any of the boys in my class ever read it, they certainly didn't do it in public.

Throughout the work we see Hanagarne's love affair with books demonstrated over and over again.  As a fifth-grader at a newly built elementary school he marvels at the all the brand new books in the library "a virgin landscape of pages and paragraphs and dust jackets...". He packs eight boxes of books to take with him to college; and knows he has found the woman of his dreams when she shows him the accessories she made for her Strawberry Shortcake dolls as a girl which included  homemade backbacks, each carrying tiny hand-sewn books. "That Jeanette had spent her childhood sewing books so that her dolls could be literate was too perfect." Of course he instills a love of libraries and reading in his own young son, and puts no restrictions on what he can read (at least he doesn't admit to any). Stay tuned next week for my Banned Books Week essay about why I let my daughter read whatever she wants.

I was especially intrigued by his description of a patron in his library who traveled from Nicaragua. The visitor was awed by the huge library, where information was free. A "miracle" he called it, so different than anything he was used to. The following pictures may give readers an idea as to what he meant.


After 10 years of picking away at his undergraduate degree, Hanagarne manages to get his Masters degree in Library Science in just one year. The author sums up his library school experience thusly: "Library school was uninspiring." I often wonder about those librarians I speak with who did find their studies inspiring. Did they take better classes? Go to a better school? or do they just think that much differently than the rest of us? Uninspiring indeed.

The descriptions of body building were the least interesting aspect of the book to me, though I was bemused by the reactions of those who found out what the super-tall, muscular man did for a living. People really seemed to have a hard time reconciling these two facets of his life. "You're a strong guy" one observer says. "Do you work in construction or something?" "I'm a librarian" responds Hanagarne. "Oh. Wait, what - like in a library". Yeah.

I checked  this book out from the library where I work. Our standard location for a barcode is on the top of inside back flap of the book jacket, where one likely finds a short "about the author" biography. And so it is for this book. I got a kick out of the fact that the photo of Hanagarne, holding a boulder over his head, has been altered by the barcode placement, so that he looks like he is holding up the barcode over his head. Seems appropriate somehow for the world's strongest librarian. 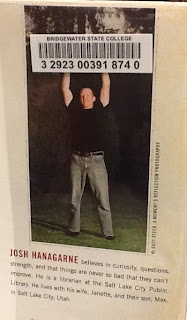