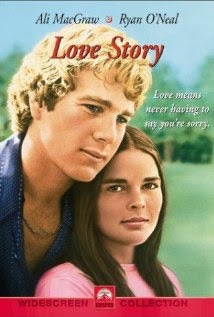 Love  Story is one of those iconic films - everyone knows about it, even if they haven't seen it. It was made in 1970, back when a PG rating meant a movie could have a love scene (even between unmarried people), and deal with heavy issues like death, and medical ethics. Growing up in the '70s I heard a lot of talk about this movie, but in fact, had never seen it myself. I knew it was a tragic story of a young woman dying, but what I didn't know was that the dying woman worked in a library. In the first scene Jennifer (Ali McGraw) gives Oliver (Ryan O'Neal) a hard time for using the Radcliffe library, even though he has so much more available to him at the Harvard library. She is dressed the part for this, complete with big glasses which she is never seen in again. In fact, we never see her in the library again. Once she is removed from the library setting she becomes much more glamorous.
Posted by YearofBooks at 5:23 AM