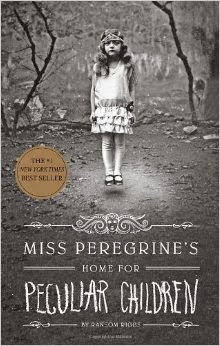 Using real vintage photographs Ransom Riggs creates an eerie story of time travel and creepy kids. Miss Peregrine's charges live in a "loop" in which it is always September 3, 1940. They are visited by Jacob, whose grandfather once lived among them. Jacob tells them about the future, and gives them the sad news that his grandfather, Abe, has died. Jacob discovers that he, too, is "peculiar" and learns that the stories his grandfather told him growing up (about kids with such gifts as the ability to levitate, and invisibility) were all true.

After Jacob witnesses his grandfather's death, and swears he saw a real monster kill him, Jacob's parents send him to Dr. Golan who recommends a visit to the library to see if he can make any sense of his grandfather's last words. He falls asleep over some of Ralph Waldo Emerson's writing, and wakes up screaming, upon which he is "unceremoniously ejected from the library."

Also at Dr. Golan's suggestion, Jacob and his father travel to Scotland to visit the place his grandfather lived. There he finds a library in Miss Peregrine's home. The first time it appears in the present day in an abandoned and bombed out building where "the creep of moisture had bowed the shelves into crooked smiles". He sees it again as it appeared in 1940 where it was in "a real classroom". He finds in the library the Map of Days (easy to find because it was "the largest one in the library").

A good spooky read for October. I plan to read the sequel.
Posted by YearofBooks at 12:19 PM