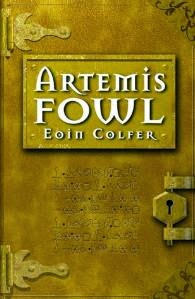 I'm not sure whether I liked this one or not. To be sure, the characters were rather unlikeable. I didn't really sympathize with any of them. I do, however, like a book with a lot of twists and turns, and one that doesn't always have a neat ending in which everyone gets what they deserve.  I also liked that the story hinged on getting and decoding a book (much the same way Mr. Penumbra's 24-Hour Bookstore did). It brings together my two passions of books and languages.

In this work, young Artemis Fowl, a prepubescent mastermind, finagles the fairy code book from an alcoholic gutter-dwelling fairy, and uses his new found knowledge to kidnap fairy Holly Short. The resulting negotiations involve centaurs, dwarves, trolls, and "a ton of gold".

Libraries were mentioned twice, although there were no actual libraries in the book. The fairy from whom Artemis procures the fairy code book originally tells him that she is a healer and has no book. "You want book, go to library" she admonishes him.

The other use of library was as a unit of measure. While it is not usual for a library to be used as a metaphor to denote a large amount of information (I write about this in one of the earliest posts on this blog), I have never considered that there would be a specific measure of this. But, it appears that magical folk have indeed created a system of measurement using libraries as a unit. Specifically we learn that 10 gigabytes equals "half a library." It would of course follow that 20 gigabytes of information is "in paper terms" a full library. So now we know.