BiblioTech : Why Libraries Matter More than Ever in the Age of Google - by John Palfrey 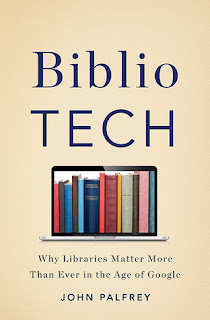 Last week I attended the Rhode Island Library Association (RILA) Conference in Newport. I was fortunate to be able to hear Scott Bonner (the funny and humble director of the Ferguson, Missouri Public Library) talk about how he was able to continue to serve his community during last August's crisis in the wake of the shooting death of Michael Brown by a police officer. More recently, a similar situation in my hometown of Baltimore, Maryland (where Freddy Gray died while in police custody) lead librarian Melanie Townsend Diggs to the decision to keep the Enoch Pratt Free library open even while violence erupted nearby. These examples of library as a safe community space (read more about them in American Libraries magazine) are only part of the reason that libraries still matter.

Providing computers and wifi to those who do not have home access, or are away from home is certainly another important reason why libraries still matter, but it is not just the digital access that is necessary, it is also the access to librarians who can help people navigate the internet or assist a student with completing her assignment. Alison Head and Michael Eisenberg's reasearch for Project Information Literacy demonstrates that students who consult with librarians when conducting school research are more likely to use research databases than Google for future research needs. A finding that has been confirmed by my own research. Palfrey also points out that while many coffee shops and restaurants may also offer free wifi, there are no librarians around to help patrons with their research. Furthermore, it is "simply not true that you can find everything you need through a Google search."

The idea of public libraries belonging to the people, rather than corporations, is another essential aspect. Author Dennis Gaffney is quoted in Palfrey's book


I love libraries because their names have not yet been appropriated like those of sports arenas by the the likes of Pepsi, Fleet Bank, or National Car Rental. The notion that anyone would name a community library the Tropicana Branch sounds absurd, and it should, because we own our libraries.

Palfrey goes on to explain that this means that "we are free to pursue our own interests and ideas, without fear of reprisal or economic consequence."

New information is exploding at a rate that could not have been imagined even 25 years ago. "Each day we produce 2.5 quintillion bytes of data. As a result, 90 percent of the data in the world were created in that last two years." Enter libraries and librarians who are helping to organize and manage the information, and helping people to locate what they need among the plethora of digital and print sources. Digital Public Library of America is one starting place where digital collections are being created and curated. Record preservation and record sharing is still within the purview of libraries, museums, and archivists, all of which employ people specifically trained to do so.


support all children as they learn to make sense of today's new information landscape, not just those who can afford to download any book they like onlo their Amazon Kindle. Digital savvy should not be limited to those who can pay for it, and school libraries play an essential equalizing role in this respect.

This is true even as we continue to see stories about school libraries, and librarians being among the first to go when budgets need to be cut.

Issues of privacy are treated in the chapter "Law: Why Copyright and Privacy Matter so Much". Librarians have questioned and fought the Patriot Act, ever since it first went  into effect within weeks of the 9/11 attacks.


Librarians worry, with some reason, about what protections readers will have when the police come calling for information about books they have checked out. Librarians have long fought encroachments on civil liberties of this sort. The debate over the USA Patriot Act was a major cause célèbre for librarians, for instance. The notion that a reader's interest in a book about Islam might tip an investigation toward a particular suspect sent chills down the collective spines of librarians.

Interestingly, at the aforementioned RILA conference I attended a program on patron privacy with respect to third party vendors, and discovered that while librarians may respect patron record privacy our vendors do not necessarily share our views.

As one might imagine I marked a lot of passages in this work while I was reading it. I did not blog about everything that interested me here. Some of what interested me, but which is not included here, can be found in this video of the author speaking at the Kansas City Public Library.