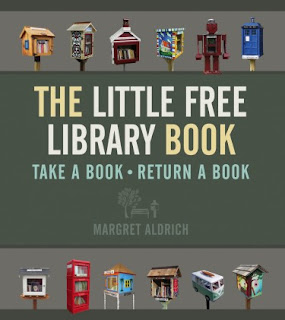 Although the idea of  the "take a book, leave a book" shelf has been around for a while in coffee shops, resorts, and other places (my own library has one for example) the Little Free Library Movement (LFL) is relatively new (2009). This network of boxes with free books set up in front yards, parks, and other public spaces has become a worldwide phenomenon and has helped to bring together neighbors, provided reading materials to impoverished areas, and given countless crafters and woodworkers an outlet for their talents. The Little Free Library Book tells the history of the movement, and includes many stories of individual LFLs with interviews of their stewards. Color photographs of the myriad LFL designs (which includes those designed to look like houses, churches, movie theaters, cars, and even a tardis enhance the enjoyment of reading about how they were built. Each LFL steward has his or her own reasons for starting and/or maintaining the library. All of the stories told in this book were inspiring.

I was especially interested to read the story of Texas' first LFL which was also the first one to be located inside of a school. Bilingual librarian (my favorite kind of librarian) Lisa Lopez started the LFL at the Zavala Elementary School in El Paso ("rated one of the most illiterate cities in the nation"). Lopez was determined to get books into the citizen's hands and to date her efforts have led to the establishment of over fifty LFLs in the city. She has gotten students at her own school excited about reading, and sharing books by decorating and maintaining Zavala Elementary School's own Little Free Library.

Stories about communities coming together to save their LFL were also part of this work. One story that went viral among the library set last year was that of nine-year-old Spencer Collins of Leawood, Kansas whose LFL was ordered taken down when it was determined that the freestanding structure violated the city code. Booing and hissing of the Leawood City Council was fast and furious, and the decision was ultimately overturned.

I was especially interested to read the story of Joceyln and Glenn Hale (Minneapolis, Minnesota) who learned to embrace all types of literature for their LFL. They originally saw their project as a way to share classic literature, but since users are invited to "leave a book" as well as "take a book" and the offerings soon included "bodice-ripping romances, marriage and fad diet advice, and dogmatic religious books". Their first response was to cull the books that did not meet their standards but they soon realized that what they were doing was banning books. Their LFL is now a place where all types of books are shared and enjoyed.

Truly an inspirational read that has me thinking about starting my own Little Free Library. I checked the LFL map and discovered a dearth of LFLs in my neck of the woods.

I did find an LFL in Marion, Massachusetts last fall (which appears to be gone now). Find out which book I selected from it here.

Lagniappe:
Sure to put a smile on my face is reading about another book I've already blogged about. In this case Aldrich refers to Laura Damon-Moore's book The Artist's Library: A Field Guide which I reviewed here earlier this year.
Posted by YearofBooks at 12:25 PM