Voracious: A Hungry Reader Cooks her way through Great Books - by Cara Nicoletti 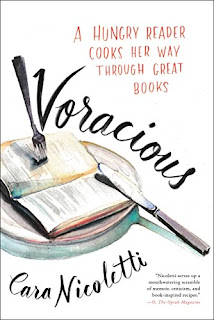 This lovely memoir brings together my two favorite hobbies: reading and cooking. Nicoletti is not only an avid reader, she is also a chef. In each of these self-contained chapters the author reflects on a book and what it meant to her, and also provides an appropriate recipe. The work is divided into three sections: Childhood; Adolescence and College Years; and Adulthood so there are chapters about well-known children's favorites as well as darker adult-themed books. I read this one aloud to my husband. We very much enjoyed it and liked that the chapters were short enough that we could read two or three at a time and not be tired afterwards. I read many of the books she writes about which made this even more fun for me. The recipes run the gamut of fairly easy (Perfect Soft-Boiled Egg from Jane Austen's Emma) to rather complex (Chocolate Éclairs from Virginia Woolf's Mrs. Dolloway). Many of the recipes (including the éclairs) called for mixing something in an electric mixer using a paddle (or some other kind of) attachment. Much as we love to cook, we are not prepared to invest in some of the equipment needed to make some of these recipes, although we will be trying some of them out, which we will most certainly post on our Nueva Receta blog. Stay tuned.

Of course no book memoir would be complete without at least a few libraries sprinkled in. One of Nicoletti's early library memories is of watching the 1978 movie Puff the Magic Dragon in her school library in first grade each time it rained too hard for the children to have recess outside. She really hated this movie


Not only did the entire premise of it terrify me, but it gave me the saddest most anxious feeling deep in my gut...with those dulled psychedelic colors and Peter, Paul, and Mary's eerie crooning creeping into my nightmares.

After many viewings of the film her intense dislike for it finally caused her to ask her teacher, Miss Walker, if she might perhaps read a book in the library instead of screening the movie yet again. To which Miss Walker replied "Pick a book and you can read quietly until the movie is over." Nicoletti reports that this memory is "one of the happiest of [her] childhood-not only because [she] escaped Puff, but because of Miss Walker's infinite and quiet understanding, and her gift...of thirty minutes surrounded by books." The book she chose "that day, and for many many days afterward was the first installment of the Boxcar Children series..."


I never read any of the Boxcar Children myself. And honestly, much as I love books I imagine given the choice, I would have watched "Puff" for the umteenth time over reading a book as many times as I could as a child. I really love Peter, Paul, and Mary. And I truly dig that '70s animation. Although I must say, this film fails the Bechdel test horribly. There aren't even two women in the film, much less two that have a conversation.

The author also makes note of the fact that the Boxcar Children series "caused quite a stir at first. Parents objected to the children's happy, adult-free world and the tragic backdrop of their story-all very real, scary stuff". She also points out that perennial children's favorite Charlotte's Web has had its share of censors as well.


...it's been banned in Kansas for including talking animals, which some educators deemed 'unnatural', and avoided by others who think the themes of death and sacrifice are too heavy for its young audience. It has also been challenged in England by teachers worried that the discussion of eating pork would be offensive to Muslims.

Nicoletti has a few other places in which she specifically mentions getting books from the library. She biked to the library in fourth grade to find out about Sylvia Plath, and "spent hours on the floor of the library that day, trying to make sense of just one line of Plath's poetry, but...left with only a vague sense of dread that [she] would never be happy again once [she] turned ten.

In her discussion of Jane Austen's Pride and Prejudice she makes note of the library within the book itself, as well she discusses the fact that she found the book's "lack of food description excruciating" (emphasis in original). She was particularly frustrated by the fact that there is no information about what, exactly, white soup was. So much so that that "one scene...had [her] searching for Regency-era cookbooks whenever [she] went to the library."

And, finally she describes sobbing "ugly, messy cries in [her college] library" following the break-up with her long-time boyfriend while translating The Aeneid for Latin class.

This fun book is based on Nicoletti's Yummy Books blog.
Posted by YearofBooks at 10:45 AM