Harry Potter and the Half-Blood Prince - by J.K. Rowling 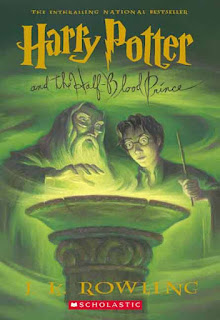 It's that time of year again - Harry Potter's birthday! This was my third go round for the sixth book in the series. I still love the stories as much as I ever did, and I still hold steadfast in my opinion that the first book is the best one.  I find the later books, like The Half-Blood Prince, are more scary than magical. Which is not to say I did not enjoy reading this one again. This was my first time reading it looking specifically for library references. The first of which appears almost halfway through the book: Harry and Hermione speak in whispers about Ron and Lavender Brown, love potions, Harry's marked-up copy of Advanced Potion-Making, and how anyone could have snuck Weasleys' Wizard Wheezes into Hogwarts. Meanwhile librarian Madam Pince "prowled the shelves behind them". She apparently prowls until closing time when she "appeared around the corner, her sunken cheeks, her skin like parchment, and her long hooked nose illuminated unflatteringly by the lamp she was carrying." At which point she notices Harry's copy of Advanced Potion-Making and deems him a "depraved boy." And, as it turned out Madam Pince was not the only one lurking. We discover near the end of the book that Draco Malfoy also overheard the conversation about sneaking in potions, providing him with an idea about how to get a bottle of poisoned Mead into the Hogwarts castle.

Even in the wizarding world the library is a good excuse when one needs a get-away plan. Harry gets tired of telling everyone how it feels to Apparate and is "forced to lie and say that he needed to return a book to the library." Likewise Harry lies to Snape when asked where he found out about the Sectumsempra curse. He says it was in a library book, when of course, it was really found in his annotated edition of Advanced Potion-Making.

Super-smart Hermione has always made tracks to the library when she needed information but in this devastating volume "the Hogwarts library...failed Hermione for the first time in living memory. She was so shocked, she even forgot that she was annoyed at Harry for his trick with the bezoar." The library does come through for her, though when she finds a "whole collection of old Prophets up there" one of which contains information about one Eileen Prince. Could the Half-Blood Prince have been a girl?

Librarian Madam Pince makes a final appearance at the end of the book during Dumbledore's funeral "standing beside Filch, she in a black veil that fell to her knees, he in an ancient black suit and tie reeking of mothballs." Well, this certainly gives one pause, doesn't it. Could Pince and Filch be an item? We know Filch is a squib, which may be to blame for his sour personality. I'm beginning to think that Madam Pince is a squib as well, and perhaps that is to what we owe her nastiness. But really, there is no reason for any librarian to feel that way. One doesn't need to work at Hogwarts to know that all libraries are magical places, after all.

Posted by YearofBooks at 7:45 AM

Email ThisBlogThis!Share to TwitterShare to FacebookShare to Pinterest
Labels: boarding school, children's fiction, England, I was at the library, magic, stereotype