The Card Catalog:Books, Cards, and Literary Treasures - by The Library of Congress 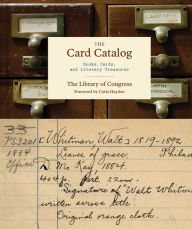 Almost anyone who used a library before about 1990 (and many after that) will remember using a card catalog - a now obsolete method of finding books in a library which involved index cards in drawers. The cards were interfiled by book title, author, and subject and had the call number written in the upper left-hand corner. Those who attended the Graduate Library School at the University of Arizona when I did (1990-1991) will remember a cataloging course in which just about all we did was learn how to create proper entries for catalog cards. Machine Readable Cataloging (MARC) records were beginning to emerge in some libraries at the time (including at the University of Arizona) but we did very little with computers in the class, instead we hand wrote entries, and were graded on such things as how close together our punctuation marks appeared to be. What I didn't know at the time was that there was actually a thing called "Library Hand" that prescribed the penmanship to be used on hand written cards. Now that I know this I'm frankly surprised that that wasn't part of the curriculum.


There is a romance around the card catalog. I will admit to missing them. The old oak cabinets were iconic of libraries once upon a time, and as a youngster I was proud that I knew how to use them. My ability to employ the catalog to find information marked me as a learned person. Card catalogs were not without their faults, however. Lazy patrons, rather than writing down a book's call number, would sometimes simply remove the card from its drawer, whence it would never return. Censors could also easily remove all references to a particular library book simply by ripping all the relevant cards from their drawers making it virtually impossible to find the book. This was certainly a lot easier than actually going through the channels to have the offending book removed the library, and frankly a lot more effective. It was also not uncommon for cards to be misfiled, making finding a needed resource into a special kind of challenge.

When I discovered that a new book had been published about this once quintessential symbol of the library I immediately purchased the e-version and downloaded it to my iPad in celebration of National Library Week.

None other than the newly appointed Librarian of Congress, Carla Hayden, wrote the foreword to this work. I made an instantaneous connection upon reading the first sentence of the book


One of my first assignments when I began my library career was to file Library of Congress card catalog sets into a wooden case in the storefront branch of the Chicago Public Library.

Such was also one of my first assignments at my first library job (as a student assistant at the University of Arizona Lunar and Planetary Laboratory Library) in 1991. I imagine this experience parallels that of many Baby Boomer librarians.

The card catalog really dates back to that most venerable of libraries - The Library of Alexandria where books were actually scrolls, and had to be organized in such a way that scholars could find what they needed. The Pinakes was created by Callimachus who divided the scrolls into categories, and created records which included the number of lines, and the opening words of each scroll. You can read an excerpt from the book that describes this early catalog  (published in Time magazine).

I started this blog six years ago, but I've been blogging about books since 2009. My first book blog was called "My Year of Reading 'Year of' Books" a bit of a meta-blog that featured books of the "stunt lit" genre in which the authors took on a yearlong project and wrote about it. In 2010 I wrote a blog called Celebrating the States - a yearlong project during which I posted on each of the 50 states on the anniversary of its statehood. Each post included information about a food or recipe associated with said state, along with a review of a movie that took place in the state, and a review of a book set in the state. Every once in a while I read about a book I've blogged about in another book. I had the good serendipity in reading The Card Catalog to find  a copy of the catalog card from Idaho: A Guide in Word and Picture - written as part of the a program of the Federal Writers' Project during the Great Depression. This was indeed the book I read when I blogged about Idaho. Looking back at the post it seems it was almost in the cards (pun intended) that I mentioned the catalog record for it! 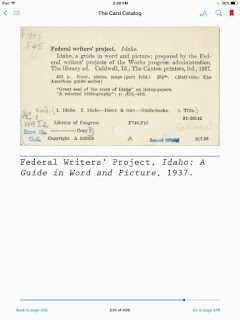 This book has some wonderful pictures, and a lot of history not just of catalog cards, but of the Library of Congress as well. It is a quick read and is sure to be enjoyed by librarians and library lovers alike. Read more about this book, and card catalogs here.

Posted by YearofBooks at 3:13 PM