The Elephant Whisperer -by Lawrence Anthony 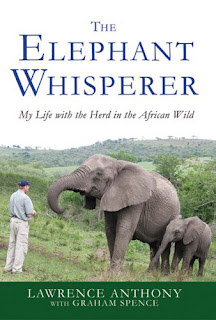 It was looking mightily like I would not be blogging here about Bridgewater's current One Book One Community read. This story of the author's affinity with a rogue herd of elephants who find their home in Anthony's South African game reserve in the early 2000s didn't have any libraries in it. However, just as the book was winding down (on page 366 of 368) Anthony explains how elephants' reputations for long memories is well deserved as older elephants teach young bulls


masculine etiquette as well as more practical matters of survival in the wild, such as where the best watering holes and the most succulent branches and berries are....An ageing elephant male is not something surplus to be dispatched by some meagre trophy-gatherer. He is a breathing reference library [emphasis mine]; he's there for the health and well-being of future elephants. He teaches the youngster who they really are and imparts priceless bush skills to succeeding generations.

And there you have it.

This was a popular choice for One Book One Community (OBOC) - a favorite of many committee members, and OBOC's fans have shown great enthusiasm for it. I wasn't crazy about it myself though. As much as the author loved animals, and was able to commune with them, he seemed unable to transfer that respect to his interactions with other humans, which I found rather off-putting.
Posted by YearofBooks at 12:41 PM

Email ThisBlogThis!Share to TwitterShare to FacebookShare to Pinterest
Labels: elephants, One Book One Community, South Africa