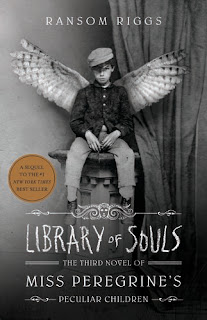 I finally got around to reading the rest of the series from Miss Peregrine's Home for Peculiar Children. When I discovered that the third book was called Library of Souls I really couldn't put it off any longer. Books two and three continue the tale of Jacob and his Peculiar friends using the same vintage photograph device as was used in book one.

Book 2 (Hollow City) is not so library-centric, with the Peculiars encountering only one library as they run through a bombed-out London during World War II seeking shelter, not only from the bombs, but from the hollows chasing them.


Still I could feel them coming. There were out in the open now, out of the cathedral, lurching after us, invisible to all but me. I wondered if even I would be able to see them here, in the dark: shadow creatures in a shadow city.

We ran until my lungs burned. Until Olive couldn't keep up anymore and Bronwyn had to scoop her into her arms. Down long blocks of blacked-out windows staring like lidless eyes. Past a bombed library snowing ash and burning papers. Through a bombed cemetery, long-forgotten Londoners unearthed and flung into tress grinning in rotted formal wear....

Book three finds our heroes in an especially creepy place called Devil's Acre where murder is "tolerated with reservations" and piracy is "discouraged". "Is anything illegal here?" Addison (the talking dog) asks. "Library fines are stiff" is the reply. "Ten lashes a day, and that's just for paperbacks". Astonished that the place even has a library Addison is even more surprised to learn that there are actually two "though one won't lend because all the books are bound in human skin and quite valuable." Neither of these libraries were, however, the Library of Souls, a place where the souls of peculiars are deposited for reuse. As explained in Tales of the Peculiar, the only book in "peculiardom" ever to be banned


It was thought that peculiar souls were a precious thing in limited supply, and it would be a waste to take them with us to the grave. Instead at the end of [their] lives [they] made a pilgrimage to the library where...souls would be deposited for future use by others. Even in spiritual matters...peculiars have always been frugal-minded.

Of course special librarians "who could read peculiar souls like they were books"  are needed in order to access the souls in the mythical library, and finding one of them was near impossible as "a librarian hasn't been born for a thousand years".