Summer Hours and the Robbers Library - by Sue Halpern 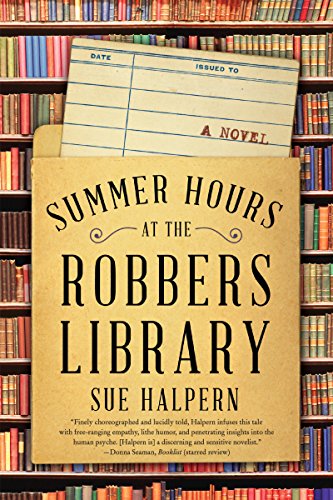 The hardest posts to write for this blog are those that are for the most library-centric books. I can't simply put a post-it note on each page that has the word library lest the entire book be marked. Writing about this book is made even harder by the fact that I read it over a month ago while I was on vacation. While I did enjoy a lot of reading (I read, or listened to, four books) while I was away  I got quite far behind on my blogging while I was on vacation last month, and returning from my trip I had so many other things I had to take care of that writing was put on the back burner.

Halpern's book tells the story of the intersecting lives of Solstice (Sunny) and Katherine (Kit) who work together at the Riverton Public (Robbers) library in New Hampshire. Kit is a forty-something reference librarian and Sunny is a fifteen-year-old who "had been sentenced to work at the...library for the summer after she was caught trying to steal a dictionary from a bookstore in the mall." Sunny procured her sentence in kids' court "the place where good kids, or kids who haven't yet gone bad, are sent when they do something wrong, or dumb, or both..."

So, while I didn't mark every time the word "library" was used, it turns out I did mark more than a few passages. Let's start with the word sesquipedalian.

When asked by the judge why she stole the book  (a dictionary of all things) her response that she didn't have enough money elicited further explanation. To which Sunny explained that she wanted to be able to look up the meaning of words she didn't know - words like sesquipedalian. Poor Sunny still didn't know what it meant because she didn't have the dictionary. Of course I could have told her the meaning of my favorite word: sesquipedalian - a foot and a half long - from the roots sesqui (one and a half) and ped (foot) - a word that essentially defines itself. But Sunny wanted to be able to look up the word herself. She was "tired of always having to ask someone when [she] didn't know the meaning of a word."

It is a bit coincidental that I marked a page that mentioned icky library vending machine food, although I had not yet written my most recent post about Dear Committee Members in which I wrote for the first time about such things.

Halpern plays a bit with stereotypes. Kit is a single (really divorced) childless middle-aged woman, who tells Sunny that she's "a big fan of silence" asked why she works in a library.

The Library Director, Barbara is described as


sturdy, with angular features and a white pageboy, handsome, not pretty - a sensible shoes kind of woman with proper manners, manners proper enough to keep her from prying into the lives of the people she worked with or trading gossip...

There is also one instance of a "shushing" which takes place when a patron laughs loudly at learning why Sunny was "sentenced" to work in the library.

Much of the book is Kit describing her life before the Robbers Library. We find out about library school, and her first job in a library archive room, and a later job at a the Science Library at Emory University. In describing each of her jobs she does admits a dark secret that all library workers know, but don't want to admit - sometimes our work is tedious, or even boring. It is true that sometimes we wonder why the building we're sitting in, waiting for a "stray question", is even open. Or that sometimes our job is just searching fruitlessly for a missing book, or making sure people aren't destroying materials. Meanwhile, we also know that we must convince others that we are "busy" at all times, lest we lose funding, or worse, the vocational awe perceived of us by those outside our occupation.

Ultimately, though we learn that Kit recognizes the value of libraries and librarians. And that while her job may not be "as awesome as being a neurosurgeon" she knows that "putting books in the hands of readers...save[s] lives, too".

Posted by YearofBooks at 7:10 AM