The Shakespeare Requirement - by Julie Schumacher 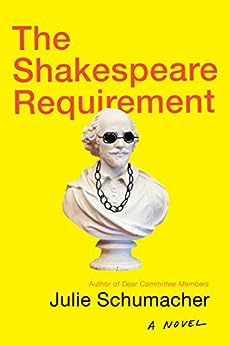 Picking up where Dear Committee Members left off, our still beleaguered professor Jason T. Fitger finds himself chair of the English Department and unable to get his colleagues to agree on the Statement of Vision (SoV) required by the University Administration in order to get a budget, schedule an event, or anything else. While searching for previous SoVs  Fitger discovers, among other things in the departmental files, "miscellaneous library fines". It is not clear if these fines belonged to the previous Chair (one Ted Boti) or if they were for a whole host of faculty from the English department.

We are also introduced to young Angela Vackrey, one of Fitger's advisees. Angela is a first-generation, home-schooled freshman. A bright, if naive, fish out of water.

Her first impressions of Payne University include a survey of some of the buildings, including the library. She likens the tendrils of ivy on the brick facade to "witches fingers".

This sinister view of the library is revisited later when Fitger is attacked by a "frigid cascade of slush" which "slipped down" the "sloping overhang" and "landed with a slap against Fitger's neck".

The menacing feel of Library at Payne University wasn't limited to the outside of the building.


the building was sadly in need of modernization. Its towering metal rows of floor-to-ceiling shelves created a catacomb-like effect, and the overhead lights, cued to old-fashioned timers, had a way of clicking off all at once, leaving patrons stranded in the airless dark.

It was "known as a place where undergraduates went to nap (and, some said, to engage in intercourse in the group study rooms)".

The foreboding continues as pencils are imagined as murder weapons in the "gloomy" space of a faculty carrel.

I'm sure, however, that despite all of this, the President of Payne University hails the Library as "the heart and soul of the university".

Go ahead and google the phrase "library heart and soul of university" and see what I'm talking about.