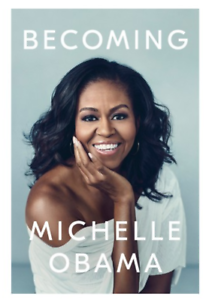 As the semester wrapped up this spring two different students came to the reference desk and excitedly asked me if the library owned this book (we do). When I walked them to the shelf to show them where it was they also both asked if I'd read it yet (I hadn't). So, once classes were over I checked it out to see what all the fuss was about.

This, in fact, is a very good book. Obama is witty, and demonstrates grace and dignity in her writing. She is well educated and wicked smart (as we Bay Staters say) and as such she knows the value of libraries. She first mentions them on page 4.


My mother taught me how to read early, walking me to the public library, sitting with me as I sounded out words on a page

After "plow[ing] through" the library's collection of Dick and Jane books (the same ones I learned to read with - she and I were born in the same year) she was excited to have new things to read when she entered kindergarten.

After graduating from high school she matriculated at Princeton (despite the comments of a thoughtless counselor had told her she was hardly Princeton material). Her awe of the university library is evident in her description


The main library was like an old-world cathedral, with high ceilings and glossy hardwood tables where we could lay out our textbooks and study in silence

She made good use of the library, studying in the carrels, and doing research about multiple sclerosis - the disease that afflicted her father - photocopying articles from medical journals to send to her parents.

Her observation about legacy kids "whose families had funded the building of a dorm or library" seems especially prescient given recent headlines about Ivy league admissions scandals.

Recognizing that she became successful in part due to the guidance of any number of people who came before her, mentoring others became one of Obama's passions. As the leader of a nonprofit group called Public Allies she worked with young people to help them find internships in the public sector. One of these protégés was a "twenty-six year old from Grand Boulevard who'd left high school but had kept up his education with library books and later gone back to earn his diploma". Who says libraries don't matter?

Just before moving into the White House she was treated to an insider's tour by outgoing first lady Laura Bush "a former schoolteacher and librarian". Obama writes graciously about Mrs. Bush, and other politicians, even those with whom she does not see eye to eye. However, when writing about 45 she pulls no punches. Her concerns about his vulgar language, his "birther" conspiracy theories, and ultimately, for the very safety of the country are made abundantly clear. I was especially interested to learn that 45 attended one of Barack Obama's White House Correspondents' dinners where he sat "stone-faced and stewing". Since 45 has not, in fact, attended any of the Correspondents' dinners since he entered the White House it is particularly intriguing that he attended one of his predecessors.

Written with finesse, this book is worthy of all the bubbly excitement demonstrated by the two students who asked me if I'd read it.
Posted by YearofBooks at 11:39 AM