A Ride to Remember: A Civil Rights Story - by Sharon Langley and Amy Nathan 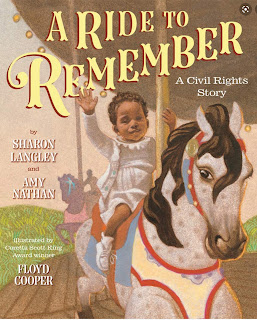 When I was very young my family and I enjoyed visits to Gwynn Oak Amusement Park in Baltimore, Maryland. Hurricane Agnes destroyed the park in 1972 and it was not rebuilt. Rather than an amusement park, it now is a park of the type one might go for a picnic, or to fly a kite.
Gwynn Oak Park opened in 1893 and like many amusement parks at the time it was segregated.I was unaware that the park had not been desegregated until 1963 when I heard about this book and attended a webinar about it last year. You can watch the webinar here.
My parents moved to Baltimore from the midwest in January of 1962 and started their family. My older sister was born in late September of the same year which made this story, about a girl who was 11 months old on August 28, 1963, especially relevant for me. Sharon Langley was the first African American to ride the Carousel at Gwynn Oak Park on the day it was desegregated.
Langley explains segregation in this work via a conversation between herself and her parents about her family's role in desegregation.

For a long time, black and white kids couldn't do many things together. They couldn't go to the same schools or to the same restaurants and libraries or even sit together at the movies. It was the law.
"Why didn't somebody do something about those kinds of laws?" I asked.
"They did," said Mama.
"We did," said Daddy.
Many people - both blacks and whites - knew that segregation was unfair and just plain wrong.
Some people said, Just wait. Times will change.
But others said, Why wait? What's wrong with now? They held protests at restaurants, stores, and movie theaters. They tried to get officials and courts to make new laws to create a better city - a place that would welcome and include all people.
By the time I was born, some unfair laws had changed in Baltimore. Kids could go to the same schools and libraries, restaurants, and some movie theaters, too - no matter the color of their skin. "But the amusement park just wouldn't budge," said Daddy.

Beautifully illustrated by Coretta Scott King Award winner Floyd Cooper this book tells a story of segregation and desegregation appropriate for young readers.
Posted by YearofBooks at 7:51 AM