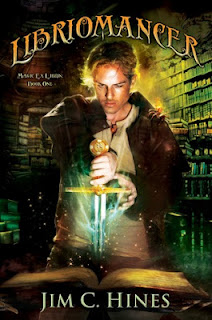 I just don't even know where to begin with this one! Where do I start with a book that not only has a magical librarian, and vampires, it also has a polyamorous, bisexual dryad; and chupacabras! The clever premise of this book is that a libriomancer has the power to pull magical devices from books, which of course can be used for good, or evil. Readers will find themselves in real geek-dom with this work. It appears that all allusions are to real books.  While works such as Harry Potter, Lord of the Rings, and the Hitchhikers Guide books may be recognizable to even those who aren't big sci-fi fans, Hines also includes many titles that perhaps don't have as large a following. I have to admit to using Wikipedia more than a few times to find out where some of the characters and magical objects came from. I got a big kick from the way the author incorporated so many species of vampires into the story. My husband and I watch a lot of vampire flicks, and we notice that each one has its own rules within the context of its story. Hines' characters are never quite sure which story the vampires they are fighting come from, so they have to have a variety of methods available for killing them.


Back in the days of Dracula  humans had a fighting chance against the undead. But the more they evolved from monsters into angsty, sexy superheroes, the more the odds of a human being surviving an encounter with an angry vampire shrank to nothing.

Fun fantasy aspect aside, though, this book actually gave me a lot to think about from a librarian's perspective.The libriomancer, Isaac Vaino, is a cataloger in a public library on the Upper Peninsula of Michigan. He was exiled there after misusing his magic, and is assigned by the magical-powers-that-be to find the magic in books and "flag potentially dangerous" ones. Those deemed to be dangerous are locked, so as to prevent other libriomancers from extracting the magic therein. Hmmmm...this sounds uncomfortably like censorship to me. Censors often believe that while they can handle what might be found in books they don't like, you never know when the work might fall into the wrong hands. Therefore, we must protect all from the danger within. This work also treats the issue of book burning. There is a clear message of information loss that comes with the destruction of the Michigan State University Library, but also we get some irony when the Libriomancer commands his fire spider to destroy a copy of a book whose escaped magic is wreaking  havoc. "I pointed and screamed something I never would have imagined myself saying. 'Burn it!'"

This reminded me of a lesson I had when I was in Library School and one of my professors told us about the first time she removed a book from a shelf after a parent complained. She said she never would have imagined herself doing it, but after reading the book, and talking to her principal who also read it, they agreed it was a pretty worthless piece of literature. It is always easy in the abstract to hold true to our beliefs, but when confronted with a real dilemma we may find ourselves making a surprising choice.

Despite his transgression with the book burning, it is clear the Libriomancer sees books as his salvation, not only are they magical they are deliverance.


Even before I learned what I was, books were my escape from the world. This place...bookstores, libraries...they're the closest thing I have to a church.

Posted by YearofBooks at 7:55 AM