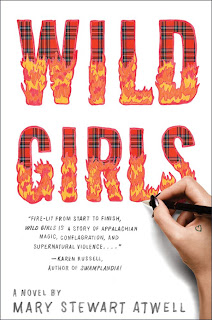 Swan River Academy caters to the families of wealthy southern girls. However, Kate Riordan is able to attend the posh school thanks to her mother's job as secretary to the headmaster, which allows Kate and her sister to attend at a much reduced rate. Being a local, Kate not only knows the legends about the Wild Girls, teenagers who start unexplained fires and kill, she is personally acquainted with some of these supernatural beings, and fears she may turn into one herself. She also wonders why there seems to be a conspiracy between the town and the school to downplay any of the violence the Wild Girls perpetrate.

Kate appears to be a regular library user, both of her local public library and her school library. Passages describe her checking books out, and browsing a copy of The History of Swan River Academy. There are several other places in the book where use of the library is evident among other characters as well, mostly for recreational reading or video borrowing, or as a place to meet. The Swan River Academy Library also turns out to be the location of one of the mysterious fires started by a Wild Girl. In this case, Kate's own sister Maggie, who eerily begins to glow just before the destruction begins. The school's headmaster seems strangely unconcerned that a student (an employee's daughter, no less) has burned the library. But even Kate later admits about herself that perhaps "I had seemed more concerned about the fire among the stacks than I was about my sister."

The book wasn't quite as exciting as I expected it to be. It was a good escape, though, and I appreciated the multi-dimensional characters. It is too often the case that books about adolescents have the "mean girls" and the nice ones, who always win in the end. Kate does some self-reflection, as well she reflects on some of her classmates and realizes she was probably just as judgmental as they were.
Posted by YearofBooks at 11:07 AM