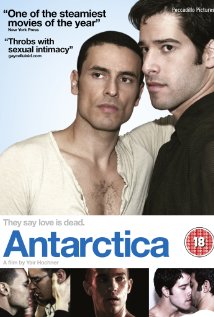 Omer is an Israeli, about-to-turn-thirty, gay librarian looking for love. There are a lot of characters in this film moving in and out and around his life including his lesbian sister Shirley, who isn't sure what she wants out of life, perhaps she'd like to go to Antarctica she tells her girlfriend (this is the only mention of the title word). Other characters include his mother and her boyfriend, both played by Noam Huberman (Miss Lalia Carry); promiscuous Boaz; author Matilda Rose, who regularly attends a support group for those abducted by aliens; as well as several boyfriends, friends, and friends of boyfriends. Keeping track of all the characters took some concentration. The library setting wasn't really integral to the story, but as Omer's workplace it provided him some respite from having to deal with everything else that was going on in his life.
Posted by YearofBooks at 8:51 AM