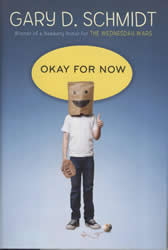 Lucas laughed. So good. "It sounds like you know what you're talking about."
Mr. Powell raised an eyebrow. "I'm a librarian," he said. "I always know what I'm talking about..."

Thirteen-year old Doug has an alcoholic, abusive father; one brother who's a bully; another who is a wounded Vietnam veteran; and a mother with a winning smile. When the family moves to Marysville, New York during the summer before Doug starts eighth grade he expects things can only get worse. But Doug soon discovers the Marysville Public Library. Although open only on Saturdays, librarian Mr. Powell helps Doug discovers a love of books through an unlikely source - volume 3 of John James Audubon's Birds of America. It is the artwork that initially piques Doug's interest and Mr. Powell sees the potential artist in Doug and teaches him to see the depth, movement, and composition in Audubon's work. He also teaches Doug that not everyone understands that books should not be sabotaged for profit. "You can't sell the pages of a whole book one by one." Doug tells Mr. Powell when he discovers that Plate CCXCIII (The Large-billed Puffin) has been sliced out of the book. Mr.Powell explains that "When it's an Audubon, you can. Most buyers can't afford a whole book, but they can buy one plate at a time - if they find someone low enough to cut them out of a folio." Doug learns that when the town needs money the Town Council goes to the library "like it was a bank or something" with a razorblade. Doug's quest to find and return the missing plates has him doing some true wheeling and dealing.

Audubon's artwork provides the segue for Doug to appreciate books and reading. This passage in which he wheedles a rare book from the private collection of Mrs. Windermere demonstrates a turning point in Doug


"You have something up you sleeve," she said.
I told her.
Mrs. Windermere smiled. Almost like my mother, which kind of surprised me. "The God of Creativity has folded his wings by your desk too," she said. She took the book, held it lightly to her lips, and kissed it. It wasn't weird. It was beautiful. Then she handed it back to me. "Nothing should ever sit and gather dust," she said...

Set in the days just prior to the first moon landing, Schmidt gives a true sense of time and place in this wonderfully library-centric work which tells a story of redemption on many levels.

Posted by YearofBooks at 5:43 AM