Revenge of the Saguaro - by Tom Miller 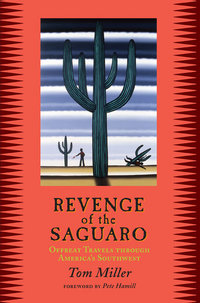 Two decades ago, when I was but a mere library school student at the University of Arizona, I had the opportunity to work for an author (Tom Miller) who was then working on a book about his travels in Cuba. I did some research and fact checking for him, and was eventually gifted with a signed copy of the book Trading with the Enemy: A Yankee Travels through Castro's Cuba. It was the first time I would see my own name on an "Acknowledgements" page - so thrilling. It was especially fun reading the book and seeing things that I'd helped the author to research.

I moved away from Tucson shortly thereafter, and lost touch with Tom. A few years ago, as I was doing some book ordering I came across a review of TWtE which had just been reprinted. I ordered the book for my library, and then did a bit of online searching and found Tom's webpage with an e-mail address and sent him a greeting. From that bit of online contact, we exchanged some more e-mails, and have since traveled to Cuba together when he lead a tour of "Literary Havana" this past January. As well, he has come to Bridgewater State University to talk to some writing students and Latin American Studies students about his work. While he was here, my husband and I purchased one of his more recent books Revenge of the Saguaro: Offbeat Travels Through America's Southwest - a collection of quirky essays. The titular essay tells of a majestic Saguaro cactus that in a final act of poetic justice, snuffs its own killer by toppling on him.

My husband, James, read the book before I did and assured me that there were librarians in it, but I was beginning to despair that the only thing I would have to blog about was one mention of Joan "a feisty high-school librarian with fire-engine-red toe-nail polish" who picked up trash with a group of volunteers along High Lonesome Road near Bisbee, Arizona. But the final essay in the book, "The Occidental Tsuris" was a true gold (or should I say copper) mine of all things library. (BTW I tried looking up tsuris in two different dictionaries, before I resorted to Googling it - here's the definition for those readers who are yiddish-ly challenged, as I am.)

In "Tsuris" Miller writes about Cochise County, Arizona, and its county seat, Bisbee, an old copper mining town on the U.S. / Mexico border. Cochise County is a place I occasionally enjoyed visiting during my own stint as an Arizonan, but I never knew about its sordid history of book banning. During the 1980s Saint David (a town I had not heard of before reading Miller's book) removed Steinbeck's Of Mice and Men, and Conrad's Lord of the Rings from the high school reading list. Likewise, a history textbook was rejected for use when one (woman) citizen who had "gone through it very carefully, making a note of each time there was a reference to a woman" showed up at a school committee meeting, and explained that "Women belong in the home. Not in history". Miller writes about three bookstore owners, two of whom worked in libraries, and one (Walter Swan) who earned a D- in library in school, before dropping out in eighth grade. I remembered meeting Swan, author of me 'n Henry, and proprietor of the One Book Bookstore. Swan's brilliant plan of publishing the book himself, and selling only it in his storefront on Main Street in Bisbee earned him quite a bit of celebrity, so much so that he had articles written about him in several national publications, and he knew that "every library in the state's got a copy" of his book. I purchased a copy of the book for my mother many years ago, and had a Polaroid picture taken with him. I imagine I read the book, but I don't remember it well, and I have no idea what happened to the photograph, perhaps it is in my folder of unsorted mementos marked "Arizona".

The two other bookstore owners were John Kuehn, who also drove the county bookmobile; and former librarian David Eshner. Their bookstores were adjacent to each other, and the strengths of their collections complemented one another. On the day that Miller rode in the bookmobile with Kuehn, he (Kuehn) signed up a young couple for library cards. They had just moved to town and told him that "one of the first things [they] wanted to do was get library cards." It reminded me of my arrival in Bridgewater, Massachusetts 16 years ago. James and I moved here on August 5, 1997. Our daughter was born on August 19 of that year. One of the few things we managed to do between our arrival and our baby's arrival was get our library cards. Essential.

Swan, Kuehn and Eshner have all since died. Swan's book is still available through amazon.

Tom talks about "Revenge" in this YouTube video.
Posted by YearofBooks at 6:09 AM