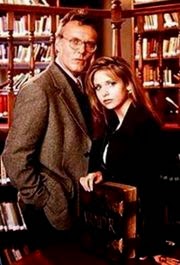 Thanks to Netflix I was able to watch all seven seasons of Buffy the Vampire Slayer in a period of about 3 months. I had heard of the show before, but had not seen it. I had watched the movie of the same name when it first came out in 1992, and frankly didn't like it. Since it has been my experience that television shows based on movies are far worse than the films, I could only guess that I wouldn't like this program much. Its television premier in 1997 also coincided with an 1100-mile interstate move, and my becoming a parent, so adding a television show to my life would have just been too much change. I had been told that I might like the show for its feminist message, and because it had a kick-ass librarian in it, but still, I never got involved. I'm not sure what made me decide late last year to give it a try, but once I started I was completely hooked. Of course, for me Rupert Giles (Anthony Steward Head) Buffy's "Watcher" (undercover as a mild-mannered librarian) was the best part of the show. Giles didn't just pretend to be a librarian, he cultivated good research skills in Buffy and her band of "Scoobies" so that they could most effectively fight their demons. And although Giles was the high school librarian only for seasons 1-3 his determination for instilling good research skills and a love of life-long learning are evident throughout all seven seasons.

I talked to my sister, a long-time fan of the show,  just as I was starting to watch season 5 and told her that my favorite episode up to that point was "Band Candy" from season 3 and I asked her if anything was coming up that might trump it. She told me to just wait until I got to season six, which was full of surprises. While I concur that that season certainly had a stellar line up of plot lines, plus fun musical numbers, it was seriously lacking in Giles time. And now, after watching all episodes I remain steadfast in my favorite pick. The thing about "Band Candy" is that we see Giles as he was as a teenager - a James Dean-esque bad boy who smoked, and looted, and had sex on the hood of a car. It turned the usual librarian stereotype on its head. So often in pop-culture we see a stuck-up librarian as someone who simply needs to lighten up and let their hair down, but when we are shown Giles as a young person we see the "hair down" persona who then became a straight-laced librarian, and can see that it's okay, good even. And, in this case, the bad boy still comes out when needed to kick vampire butt. Giles is smart, strong, and sexy. 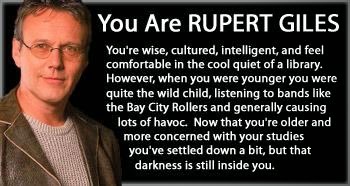