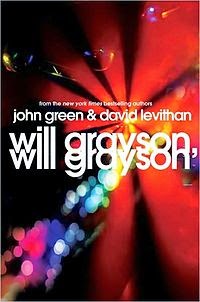 I've read a few of John Green's books, at the recommendations of my daughter and niece (who is especially big fan) and while I also like his books, and find his characters to be funny, witty, and smart they just don't seem to use the library that much. You won't find The Fault in Our Stars reviewed on this blog at all for as much the characters in that book liked to read, they never once mentioned going to the library. And while there was minimal use of the library in Looking for Alaska  it was hardly as a place of intellectual fulfillment. Will Grayson, Will Grayson (titled for the two characters in the book with the same name) follows the same pattern of slim library pickin's as the others I've read. The one and only place I've marked the word "library" is in a passage in which a disgruntled member of the math team, upset that one of the Will Graysons in bailing on the "mathletic" competition, "picks up his (lunch) tray, murmurs something about library fines, and  leaves the table." Good to know that the library will always provide an excuse for leaving a difficult situation.
Posted by YearofBooks at 10:46 AM