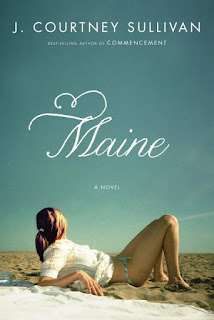 A beach read about a beach house that I read at my beach house. This story brings together four women from across three generations, each with a different relationship to the family beach house in Maine. Alice, the matriarch; Kathleen, her daughter; Maggie, her granddaughter; and Ann Marie, her daughter-in-law all end up at the beach house for the same two-week period. The relationships between and among the women are explored, and memories are surfaced. The characters are multi-dimensional, each with some things to like and some to dislike. One thing all had in common though was that they used the library.

To get to Alice's beach house you go "past the stone library and the Baptist church and a row of grand hotels..." When cleaning out her beach house after decades of use Alice donates her grandson's "collection of thrillers and political biographies" to this same library. It is also clear that she used the library regularly over the years to check out reading material, and sheet music.

Alice's dream was to become a famous painter. She was fascinated by Isabella Stewart Gardner "a great patroness of the arts...[whose] home was turned into a museum and named in her honor. She had been painted by John Singer Sargent, and she threw the most elaborate dinners full of great thinkers and artists. She traveled the world and studied in Paris." Alice checked out the only biography of Isabella Stewart Gardner from the library "which she had already read twice". Then "used her brother Timmy's card to get another book, which she had no intention of ever returning. It contained black-and-white photographs of Paris. Alice ripped them out and stuck them to the wall behind her bed." (As I said, there is something to like, and dislike about each woman).

Alice's granddaughter, Maggie, has a loser of a boyfriend, Gabe (although he is good in bed). A writer, Gabe at first is just an idea to Maggie, the former tenant of her New York apartment who is still receiving mail from Simon & Schuster. Could this mythic Gabe be such a great writer that a major publisher is looking for him, and he can just ignore it? "The thought of him helped her write, helped her keep going, and she'd joke about it to friends, how the literary power of her neighborhood's former tenants-Truman Capote, Walt Whitman, Carson McCullers and Gabe Warner, whose book she could never locate at the library-acted as her muse." Maggie does eventually write and publish her own book of short stories which Alice found "quite polished" and "bragged about it to the librarians at her local branch."

Alice's daughter Kathleen used her public library to do research on cancer after her father is diagnosed.

Ann Marie, Alice's ever reliable daughter-in-law, in making a list of everything she needed to do before heading to the beach house includes returning her library books among the many details to which she must attend.

The tensions between these women ebb and flow throughout the course of their lives. There is no grand resolution, however. One gets the idea that things will continue on, much as they do in real life.
Posted by YearofBooks at 7:37 AM