The Unlikely Pilgrimage of Harold Fry - by Rachel Joyce 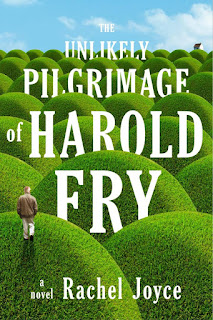 When Harold Fry receives a letter from a former co-worker (Queenie Hennessey) letting him know that she is dying, and wanted to say good-bye, Harold writes a short note in response and sets out to the mailbox, but instead of posting the letter he decides he will go visit Queenie - 600 miles away - on foot. Without going back to his house to prepare for the trip, or tell his wife (Maureen) he just starts walking, still wearing his tie and his yachting shoes. His voyage takes about three months, during which time he has a lot of time to think, remember, and reflect. People join him and turn the trip into something different than he expected, and ultimately the quest becomes more than just about seeing Queenie.

Two early memories of Maureen involve the library. He has pleasant memories of their early marriage of how she took care of their home life


...she grew vegetables in the garden,...and waited for Harold every evening on the corner...They would walk home, sometimes taking the seafront, or stopping at the quay to watch the boats. She make curtains out of mattress ticking and, with the remnants, a shift dress for herself. She took to looking up new recipes from the library. There were casseroles, curries, pasta, beans.

Even earlier memories, of their courtship, also surface


Even in those days he had begun saving for their future. He had taken an early-morning job on the rubbish trucks, followed by a part-time afternoon job as a bus conductor. Twice a week he did an all-night shift at the hospital, and on Saturdays he worked at the library. Sometimes he was so exhausted he crawled under the bookshelves and fell asleep...[Maureen] took to nipping into the library and thumbing through cookery books, and he watched her from the main desk, his head reeling with desire and the need to sleep.

The warm memories help him to reconnect with her, just one of the unlikely and unexpected aspects of his journey.