I Hadn't Meant to Tell You This - by Jacqueline Woodson 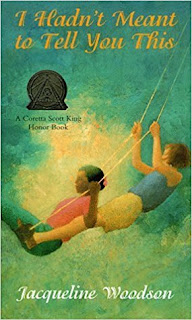 This young adult novel tells the story of Marie who befriends the new white girl (Lena) at her predominantly black middle school. Lena confides to Marie that her (Lena's) father is sexually abusing her and Marie promises not to tell anyone Lena's secret. Their friendship is challenged on many fronts and Marie learns some difficult truths.

Marie's single father dates Rose, the town librarian (who doesn't actually appear in the book). However, the town library has a small role in this work as Lena's sister's (Dion's) "favorite place in the world. She actually had a temper tantrum if...picked up too early." The library is likely a safe place for the little girl who lives with a neglectful and abusive parent.

Posted by YearofBooks at 6:26 AM