The Abortion: an historical romance 1966 - by Richard Brautigan 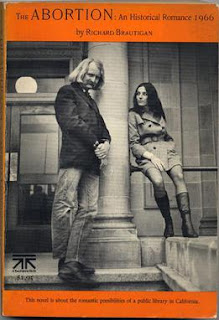 Earlier this year I posted a link to a list of 100 Must-Read Books about Libraries and Bookstores which included Brautigan's The Abortion. When I discovered that the Brautigan Library of Unpublished Manuscripts is a real place, and featured in Atlas Obscura I immediately requested the book from Inter-library loan. It is a rather quick read, and as the title suggests, it is a love story. The unnamed narrator is the librarian at this unusual library where people can drop off their unpublished works at any time of the day or night. The


library came into being because of an overwhelming need and desire for such a place. There just had to be a library like this. The desire brought into existence this library building which isn't very large...

The narrator lives in the library and never leaves the building, as he must always stay at his post in case someone rings the bell requesting a drop off. Authors and their books are listed in the Library Contents Ledger, and then authors are invited to place their book on any shelf they "fancy".


It doesn't matter where the book is placed because nobody ever checks them out and nobody ever comes here to read them.

The narrator is not without company. His girlfriend, Vida, often stays with him at night. It is through this arrangement that Vida finds herself pregnant and begins to make plans for an abortion in Mexico, and the narrator prepares to leave the library for the first time since he took the job several years before in order to accompany her. He must find someone to watch the library, get several hundred dollars, make travel plans to fly to the border, make a hotel reservation, make a doctor's appointment, and return plans. All of which he does rather easily with the help of Foster, who had once made similar arrangements for a lady friend.

I have to admit that I was a bit jealous of the librarian in the story, who as Vida jokes, lives a hermit's life. Those who know me well know that I someday aspire to become a hermit. It seems that our narrator has the best of several worlds. He gets to be a hermit, and be a librarian, and have company when he wants. He does, however, return to the library after his excursion with Vida to an unexpected surprise.

Posted by YearofBooks at 6:18 AM