How to Be a Muslim: An American Story - by Haroon Moghul 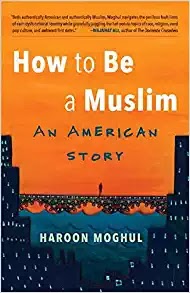 Baltimore County Public Library's April 2018 #BWellRead Challenge category was to "a memoir/biography about a person who doesn't look like you". Of course, as my husband pointed out, this could mean anyone who is not my sister, but I took it in the spirit of the challenge and selected Moghul's story. A Pakistani Muslim who grew up in New England, Moghul was born with a myriad of health problems, which relegated him to being one of the "geeky" kids growing up. And where there are geeks there are libraries.


appreciated, encouraged, and rewarded bookishness - which made life easier, since [he] was the kid who made a beeline for the library when the last bell rang.

It is a good thing he was so comfortable in the library as it is a place with which he would became quite familiar. As the only kid whose parents wouldn't sign his permission slip to take sex ed the  "doofy twelve-year-old" was dispatched to the school library while the rest of the kids in his class received their illicit lessons. He became so well-known in his library he described it as a place where "everyone fist-bumped him". As an adult he also made good use of a "well funded public library systen" while waiting for his bookish mother to give lessons on Islam to "housewives".

As an about-to-graduate student of New York University (shortly post 9/11) Moghul proposes that the University hire a Muslim chaplin (himself) to "a senior university official, a woman whose stunning workspace occupied the rarefied top floor of NYU's library". It is here that he learns that "there were levels of power and influence that [he] hadn't the slightest idea of." It has always seemed more than a bit ironic to me that University officials are so quick to recognize the value of library space only when they want to claim it for other-than-library needs.

I learned quite a bit about Islam from this work. I have enjoyed reading several religious memoirs of late. You can see my other posts here, here, here, and here.
Posted by YearofBooks at 6:34 AM