The Hundred-Year House - by Rebecca Makkai 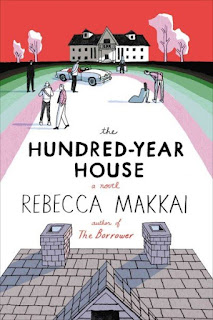 I picked this book up at the Millicent Library earlier this month just browsing the shelves looking for a fun book to read during a long-weekend trip to NYC. This story is divided into three parts moving backward in time from 1999 to 1929 to 1900. The story of the haunted house (Laurelfield) and its occupants, is pieced together through its history as an artist colony, a compromising photograph, and mysterious files locked in the attic.

There is heavy use of libraries by the characters in the first (most recent) part of the novel. In each successive part, as the story moves back through the century, they become less frequent. In the final section the only library mentioned in the one located at the estate. This is in steep contrast to the regular employment of all different kinds of libraries (public, school, academic, and archives) for a variety of uses by the characters who would live in the house 99 years later.

Doug, a would-be academic (and son-in-law to Gracie, the owner of the house) is working on his dissertation about Edwin Parfitt (a poet who once stayed at the artist colony). Doug makes good use of his public library but is not always necessarily working on his dissertation. What his wife, Zee, doesn't know is that he is writing a book called Melissa Calls the Shots (no. 118 in the Friends for Life fiction series for pre-teen girls). Something else Zee doesn't know is that he had once used inter-library loan to request a book about her infamous family when he and Zee first became engaged. Zee had similarly done research on her own family at her boarding school library some years before.

I thought I might have a first for this blog, with a character who used inter-library loan, but it turns out that honor goes to one of my very early posts - 52 Loaves which I read in 2011. This is the first one since then, however.

Doug is without a doubt the heaviest library user. Although it is one of his housemates, Miriam, who finds some dirt on the ghost of Laurelfield by reading her obituary on microfiche at the public library.

The first section of the book ends with a bonfire, built to "burn some bad art". Doug throws in three books from the Friends for Life series. Let me make one thing perfectly clear here - it is never okay to burn books, even crappy ones.

Posted by YearofBooks at 8:44 AM