All the Oz books - by L. Frank Baum 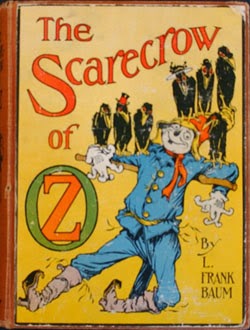 It took me a bit over a year to read all fourteen "Oz" books. Each was actually a pretty quick read, but I read other books in between. I immediately began to see certain similarities between this series and the Harry Potter books, beginning with the fact that both Harry and Dorothy live with their aunt and uncle and sometimes travel to a magical place. Both Harry and Dorothy encounter, and overcome, evil. A century after the Oz books were written we can also see a parallel in the anticipation that surrounded the publication of each of the Oz book with excitement that came with the release of each of J.K. Rowling's stories, and both sets of books have the same wide appeal across genders, and ages.  It is especially interesting to note the wide appeal of the Oz books as they were written as fantasy stories in which girls (Dorothy, Ozma, and Glinda) were the protagonists and the leaders, providing cause to question the conventional wisdom that boys won't read stories about girls. Even the wizard learned all his magic from Glinda.

While the only library in the Oz books was Glinda's personal library, it is noteworthy in that she had one especially important work : the Record Book "on the pages of which are constantly being printed a record of every event that happens in any part of the world, at exactly the moment it happens." She uses this for good only, but I really saw her, and her partner Ozma, as benevolent dictators. In conjunction with the Record Book, Ozma owned a "Magic Picture" in which she could see anything happening anywhere whenever she wanted. Only Glinda, the Wizard, and Ozma were legally allowed to make magic in the land of Oz. Others knew how, but were not allowed to use it. Whenever Ozma found out about someone else using magic she immediately went to quash it, with faithful Dorothy along to help explain the laws.

In the 1960s there developed a theory about these books, that they were a populist allegory. Although there does seem to be ample evidence of this, it is probably not the case. It was most likely written simply as a fairy tale, although I must say that Ozma's spying and Glinda's data collection seemed to predict some contemporary news stories as well!

One other similarity between the Oz books and the Harry Potter books is that both series had their censors. (Read my Harry Potter Banned Book post here). In a true twist on book banning, however, it was librarians themselves who often kept the Oz books off library shelves until the 1960s, believing the fantasy aspect of the books was "unhealthy" for children.
Posted by YearofBooks at 5:13 AM