Coming in at no. 3 on the list of most banned books of 2013 Alexie's novel about a Native American boy, Junior (a.k.a. Arnold), who decides to leave his reservation school and go to the "white" school 22 miles away is both funny and sad. Junior's uses his own talent of drawing comics as a way of dealing with the realities he faces on the reservation which include the effects of extreme poverty, alcoholism, and domestic abuse.

This book has a curious history of challenges. Most recently it was challenged in Meridian, Idaho by a grandmother who felt it was only appropriate for people aged "75 [and] up" (being unsuited to age group is one of the reasons cited for its challenges). It has also been challenged in Brunswick County North Carolina. In a truly post-modern twist to this story, teen Brady Kissel arranged to give away copies of the book  as part of the World Book Night program. A concerned parent called the police to report that children were taking the free books without their parents permission! I have to hand it to the police, who did absolutely nothing about the report.

Of course my favorite thing about Junior is that he loves to read. Junior, who is often bullied, finds solace in reading, and he admits to wanting to kiss his Geometry textbook, until he discovered that it was the same one used by his mother over thirty-years prior. This is partially the impetus for his school transfer. At his new school he befriends Gordy who explains to him that books need to be taken seriously, as illustrated in this cartoon. 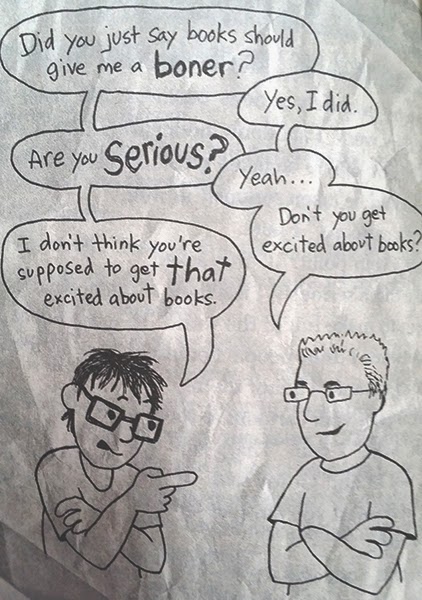 Gordy also points out that even their relatively small high school library of  three thousand four hundred and twelve books in their high school library represents almost 10-years of reading if one read at a rate of one book per day. "The world" he says even the smallest parts of it, is filled with things you don't know."

This is true even for those who read a lot, like Junior, who reads so much that he has this knowledge of Gandhi's bowel movements

A story of hope in the face of adversity.
Posted by YearofBooks at 6:28 AM