The Giver - by Lois Lowry 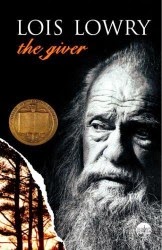 This book is among those most frequently challenged according to the American Library Association's Top 100 List for the 1990s (#11) and 2000s (#23). It is the story of Jonas who is selected to become his community's "Receiver of Memories" and discovers that the perfectly controlled world he lives in has some dark secrets.

In researching why this book has been so often challenged I discovered this article which uses both the terms "utopian future society" and "dystopian future society" to describe the world of "sameness" created by Lowry. It is a world without poverty, hunger, or war - the "utopia" we see at the start of the novel. However, it is also a world devoid of color, sex,  love, or libraries - the dystopia we see as the novel progresses. I found it especially ironic that one of the objections to the work was that it includes a theme of  "sexual awakening" since the response to any sexual feelings in this dystopia is to squash them immediately. Depictions of euthanasia, and suicide, and "selective breeding" also are cited as reasons for challenging this book.While it is true that all of these things are treated in the work, they are secrets, clearly not things that are meant to be celebrated.

While there are books Jonas' world, each household only has the same few. Only the "Giver" and the "Receiver" know that there are others with much more information than anyone else can imagine.


...the most conspicuous difference was the books. In [Jonas'] own dwelling, there were the necessary reference volumes that each household contained: a dictionary, and the thick community volume which contained descriptions of every office, factory, building, and committee. And the Book of Rules, of course.

The books in his own dwelling were the only books that Jonas had ever seen. He had never known that other books existed.

But this room's walls were completely covered by bookcases, filled, which reached to the ceiling. There must have been hundreds -perhaps thousands- of books, their titles embossed in shiny letters.

This information is withheld from everyone else in the community, in order to protect them. This paternalistic belief is common among those who would ban books.

Lowry has this to say about banning The Giver


I think banning books is a very, very dangerous thing. It takes away an important freedom. Any time there is an attempt to ban a book, you should fight it as hard as you can. It’s okay for a parent to say, ‘I don’t want my child to read this book.’ But it is not okay for anyone to try to make that decision for other people. The world portrayed in The Giver is a world where choice has been taken away. It is a frightening world. Let’s work hard to keep it from truly happening.


Watch Jeff Bridges, star of the movie The Giver read from Lowry's book in this Virtual Read Out for Banned Books Week

Posted by YearofBooks at 6:28 AM